All times are Central Time.

What's In a Name?

When you think about a church and why you should go to a church, the name, oftentimes, can tell you a lot about the church. In many cases, the name simply reflects the city or town in which the church resides. “Sutton Bible Church,” or “Sutton Community Church.” This identifies the church with a community or town. Sometimes a church is named for the street on which it sits, for example “Main Street Presbyterian Church,” or “First Avenue Baptist Church.”

However, in other cases, great care is given to naming a church. Each component of the name means something special, or carries a meaning significant to the identity of the church. That’s the case with Emmanuel Reformed Church. Let’s unpack each of these components of our church’s name.

The name “Emmanuel” (sometimes spelled “Immanuel”) comes from the Bible. Consider this verse from the prophet Isaiah:

Isaiah 7:14 (NKJV): Therefore the Lord Himself will give you a sign: Behold, the virgin shall conceive and bear a Son, and shall call His name Immanuel.

This prophecy is taken up in the Gospel of Matthew and applied to Jesus at the prediction of His birth:

Matthew 1:23 (NKJV): Behold, the virgin shall be with child, and bear a Son, and they shall call His name Immanuel,” which is translated, “God with us.”

The name “Emmanuel” means “God with us,” and that is what we believe the church of Jesus Christ is. The church is made up of people in whom the Holy Spirit dwells. The church is the body of Christ, which is in union with our risen Savior. When we gather each and every Sunday for worship, we believe that “God is with us.” Present not only as the church gathers, but also as God the Holy Spirit indwells His people.

“Reformed” identifies theological distinctions as compared to other Protestant denominations (in general), and with the Roman Catholic Church (in particular). The 16th century Protestant Reformation was a watershed moment in the history of the Christian Church. During the years spanning from the fall of the Roman Empire (5th century AD) to the Reformation (a period of just about 1,000 years), the purity of the gospel was obscured behind layers of ritual and sacramentalism that was being practiced in the Roman Catholic Church.

In particular, the gospel of justification by grace alone through faith alone in Christ alone to the glory of God alone, was “lost.” We say “lost” to emphasize that we’re not saying that for a period of over 1,000 years no one was saved. What we’re saying is that the Roman Catholic Church added much to the gospel and thereby confused and muddled its message. In a sense, if people were saved, it was in spite of what the Roman Catholic Church officially taught, not because of it.

The Protestant Reformation brought a return to the purity of the gospel message, as well as a return to the Scriptures as the sole source of infallible authority of faith and practice for the people of God. Again, Roman Catholic doctrine was a combination of Scripture and church tradition—a two source theory of authority.

Most churches who are members of the Reformed Church in the United States (RCUS), which follows in the tradition of the Protestant Reformation, have as part of their name Reformed to identify with this rich tradition.

Nowadays, it seems vogue to drop the word “church” from the name of a church altogether. It’s not uncommon to see churches called “The Village,” “The Gathering,” or “Harvest.” The thinking behind this is that the word “church” connotes something that is old, stale, out of touch with modern sensibilities. We don’t want to scare people away by this ancient sounding word “church.”

Well here at Emmanuel Reformed Church, we’re not afraid of the word “church.” The English word “church” translates a Greek word ekklesia in the NT and two Hebrew words qahal (“assembly”) and edah (“congregation”). All of these words describe the people of God. That is what the church is: The people of God.

In fact, in the Greek word, ekklesia, if you were to do a study of the word, you would see that etymologically, the word means “ones who are called out.” Now, we don’t want to engage in a word study fallacy, but whenever you think of the word “church,” think of it as meaning “the people of God assembled.” Individually, we are God’s children, bought with the blood of Christ and sealed by His Holy Spirit. But when we gather together on the Lord’s Day for worship, we are the people of God in assembly—I.e., the Church.

So in a nutshell, that’s who we are. Emmanuel Reformed Church is a gathering of the people of God who worship according to the tradition of the Protestant Reformation with the belief that when we gather for worship, God is with us!

Emmanuel Reformed Church was established in 1877 and is an organic member of the Reformed Church in the United States. The Reformed Church traces its history from apostolic times through the Protestant Reformation to today. We are indebted to God for raising up church leaders like Martin Luther, Ulrich Zwingli, John Calvin, and John Knox to direct His people back to the teachings of Holy Scripture. Our Reformed ancestors, following in the theological footsteps of these men, migrated to North America in the 18th century and established Reformed congregations in the New World.

We have adopted the universal creeds of the ancient church (Apostles’, Nicene, and Athanasian) and the Three Forms of Unity (Heidelberg Catechism, Belgic Confession of Faith, and Canons of Dort) as our confessional standards. These creeds and confessions are accurate summaries of Christian doctrine and are subordinate to our highest authority, the Bible.

We sincerely invite to join our church all who repent and confess their sins and misery, who believe they are redeemed only by God’s grace through faith in Jesus Christ, and who desire to live lives of thankful obedience in appreciation for their salvation. Your pastor, elders, and deacons stand ready to serve you at all times. 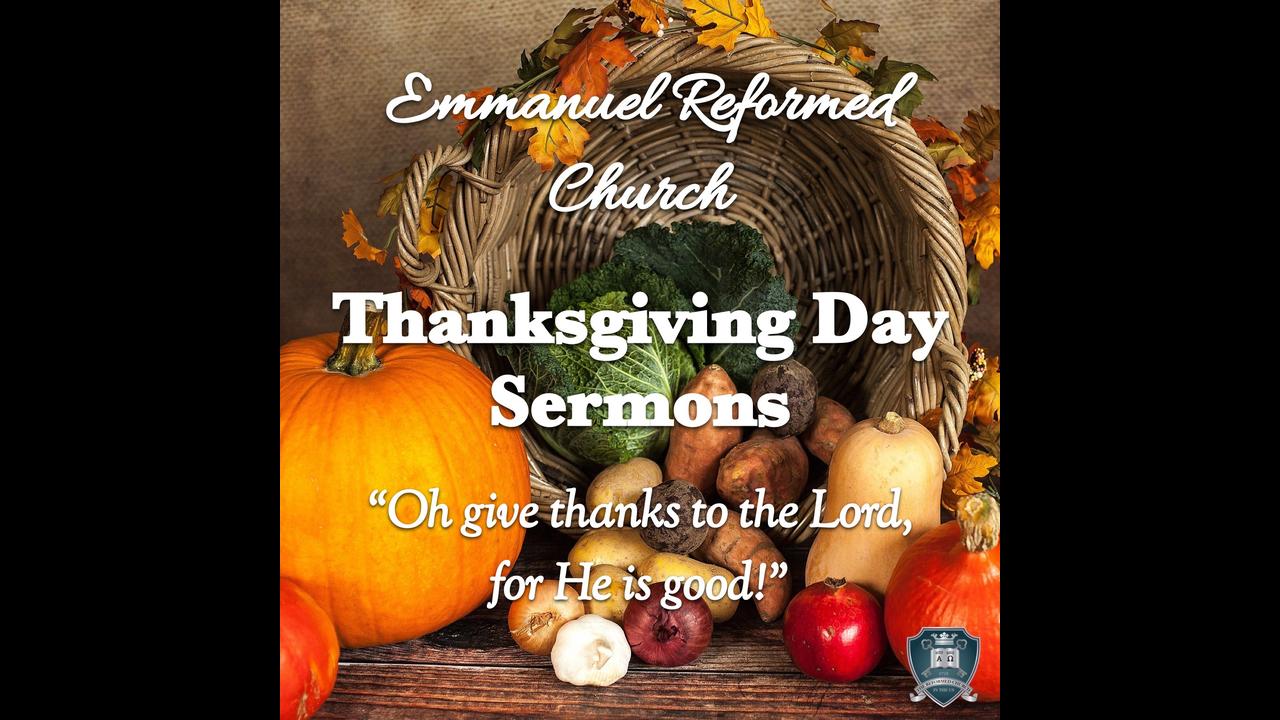 Our sermons are available for listening on a variety of platforms through SermonAudio. No matter where you are, you'll be able to access our sermons and webcasts.

Listen to any sermon anywhere, any time! Native apps for the iPhone, Android, iPad, Kindle Fire, and Android tablets with background playback, video streaming, live webcast support, download ability, and more. For easy access, just use our Church Code ID above to select your church in the ChurchOne section of the app.

Enjoy audio sermons, videos, and live webcasts on your TV in the comfort of your home. Our sermons can be accessed via Amazon's Fire TV, the Roku TV, the Apple TV, the Android TV or even via Chromecast from any iOS device.

Access our live webcast with any regular telephone without the Internet, a PC, or "data" just by dialing (712) 432-3410 and entering our Church Code ID above. Long distance charges may apply.

Install the SermonAudio skill on Alexa to listen via the Amazon Echo smart speaker. And then simply say "Alexa... open SermonAudio" to get started! Be sure to use your Church Code ID for easy access to your church's sermons. Smart watches such as the Apple Watch and Android Wear are also supported!

Amazon Kindle eBook Reader support and integration allows you to send any sermon transcript with a single click to your Kindle device wirelessly over WIFI or Cell!

Give to Emmanuel Reformed Church